Get BornHack news as a RSS feed

We are happy to announce that the BornHack 2023 tickets are now available in our webshop. The usual ticket types are available: full week tickets for adults and children, as well as caravan tickets, car park tickets, cabins, and fridge tickets. One-day tickets, tents and other village gear are not yet available.

Since the first BornHack in 2016 we have kept prices the same (1200 DKK for a standard ticket), but increasing costs have forced us to increase the ticket prices around 10% this year. A standard ticket is now 1337 DKK. If you are able to pay more than the standard 1337 DKK for a ticket then please do so, it is highly appreciated.

We are planning a BornHack 2023 kickoff at Hylkedam from the 17th to the 21st of May. More info to come, but volunteers can mark the dates in the calendar! 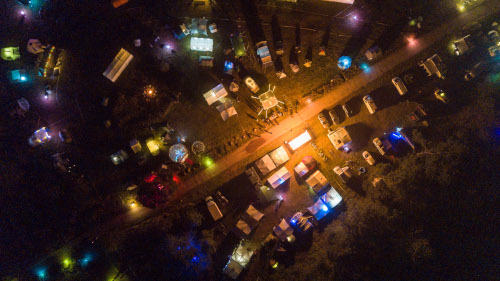 Our dear friend Jesper "graffen" Hess sadly passed away on Friday, the 14th of October. He was traveling in Berlin with his boyfriend Magnus when Jesper suffered a sudden heartattack. Our thoughts are with Magnus, Jesper's family and friends.

Jesper was a BornHack organiser. His personality, positive outlook and abilities will be missed dearly in the organisation. Nothing will fill the void left by his passing, but we are grateful for the years we got to know him. 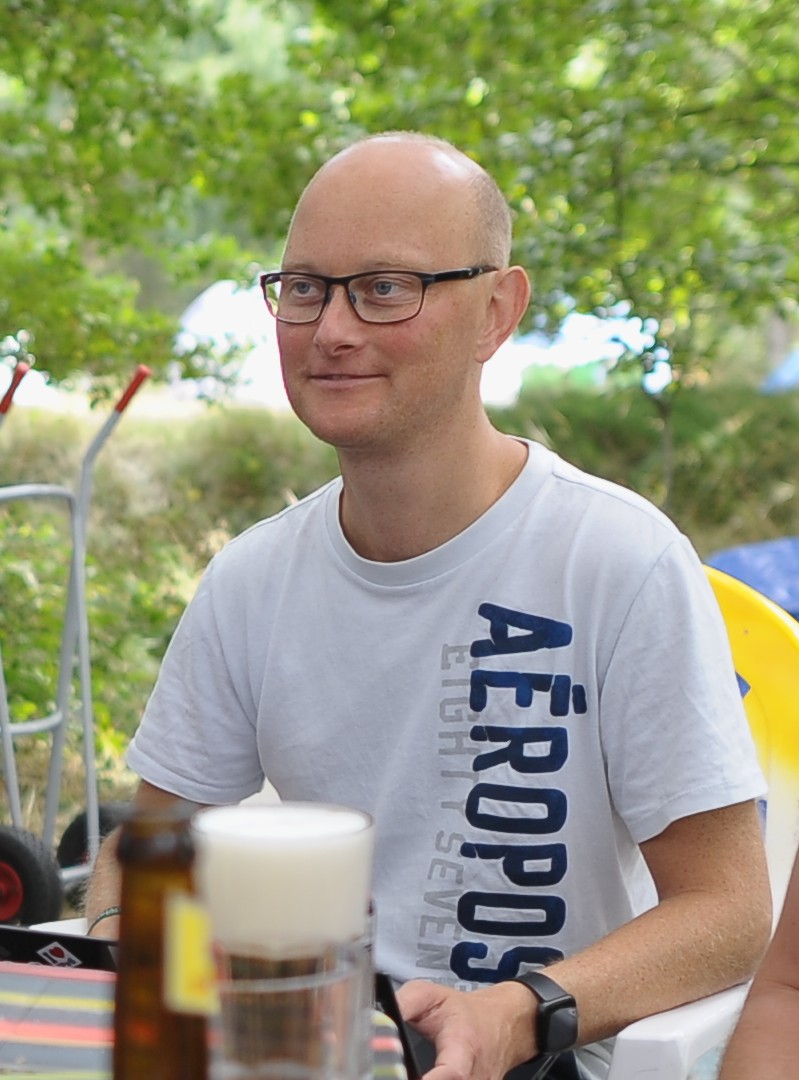 Jesper relaxing in the bar at BornHack 2018

Jesper's kind-hearted nature, sense of order, humor, and generally pleasant personality have significantly impacted the BornHack organisation. Jesper could channel frustration into positive energy like no other. When we repeatedly kept making mistakes on the logistics between ourselves and a larger delivery vendor, Jesper took over the Logistics Team, and the issues ceased to exist.

As part of BornHack's Code of Conduct team, Jesper placed himself in the epicenter of our community goals of inclusion. When conflicts arose he worked with community members and helped to resolve them in a positive way. The last thing Jesper said on the BornHack Orga Signal group the day before his trip to Berlin is an example of his constant community leadership efforts. He was telling us about a plan he has made for BornHack to collaborate with an NGO which works on making events more accessible for people with hidden disabilities. We will do our best to continue these efforts without him because we know this work was important to Jesper.

Jesper also stepped up to lead the Info desk Team when he saw a need. He was passionate about the Wellness Team where he organised massages for sore volunteers, and made sure our wilderness hottub was operational by cleaning (and thoroughly testing!) it. The Radio Team was a one-man operation using Jesper's radios, frequencies, repeater, and know-how.

Jesper at Hylkedam during kickoff 2019

As good as he was at it, Jesper never actually intended to become part of the BornHack organiser team, it was all a happy accident. He purchased a BornHack hoodie in 2017 which was mistakenly labeled "Organiser" on the back, so we suggested he join Orga, and he did. Jesper was always up for fun and quirky ideas. Joining the BornHack Orga on a whim, thus sparking countless long and wonderful friendships and maturing the organisation in the process, is a fitting analogy for his personality.

Outside of BornHack, Jesper has also contributed significantly to Denmark's IT security, privacy, and hacking communities. He ran numerous PGP key-signing events back in the day, and he helped start the highly successful Cryptohagen movement. He also helped build and run the Danish organisation data.coop, which works on local, decentralized hosting of key internet services for its members. He was also a HAM operator (callsign OZ9DLP) active in the Danish HAM community.

During BornHack 2023 we will find ways to remember Jesper, who was such an instrumental part of the BornHack spirit and community. We hope people will do what they do best and find creative ways of remembering Jesper.

Jesper was the light and life of any situation. His smile, kindness, positive spirit and constructive approach to everything meant he was universally loved. His legacy will live on forever. 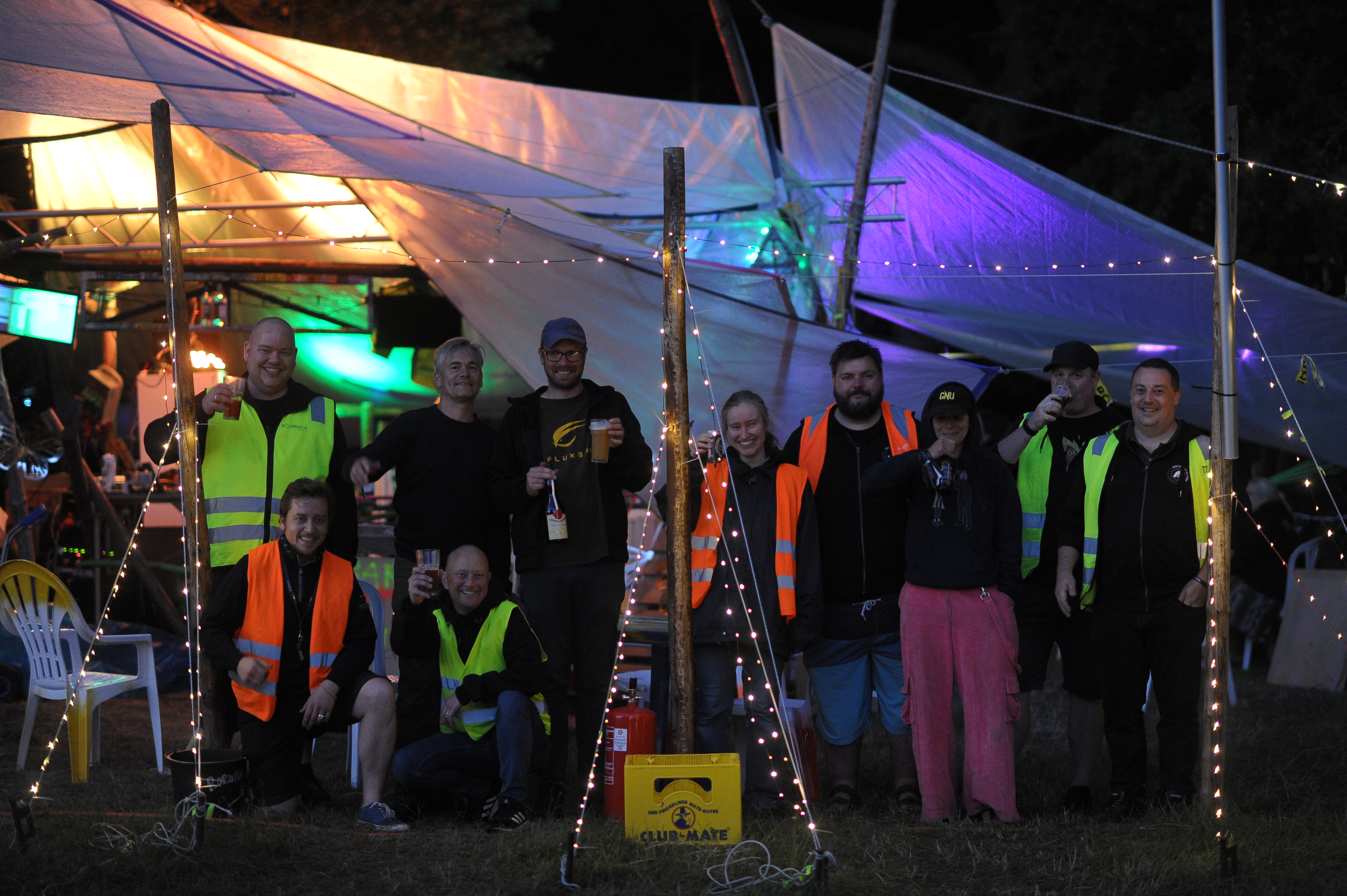 In memory of happier times

BornHack 2022 happened and it was amazing. A few hundred people coming together to develop, use, explore, criticize, and celebrate technology is quite a thing to be a part of! The talks were fantastic, the workshops were productive, the recreational events were fun. The bar was well-stocked and full of lovely people. The weather was mostly great. The Food Area had constant activity with people cooking, eating, or waiting in line for the food truck. The whole venue was beautifully lit in colourful and creative ways. Powerful lasers and flamethrowers provided impressive and popular evening shows.

There were a lot of villages and camps this year. They were big, and fun, and full of the kind of sights and sounds you only get at a hacker camp. Walking around the venue and taking it all in is incredible. It means so much to the event that camps and villages are so diverse and overflowing with weird and wonderful experiences. Please keep it up! 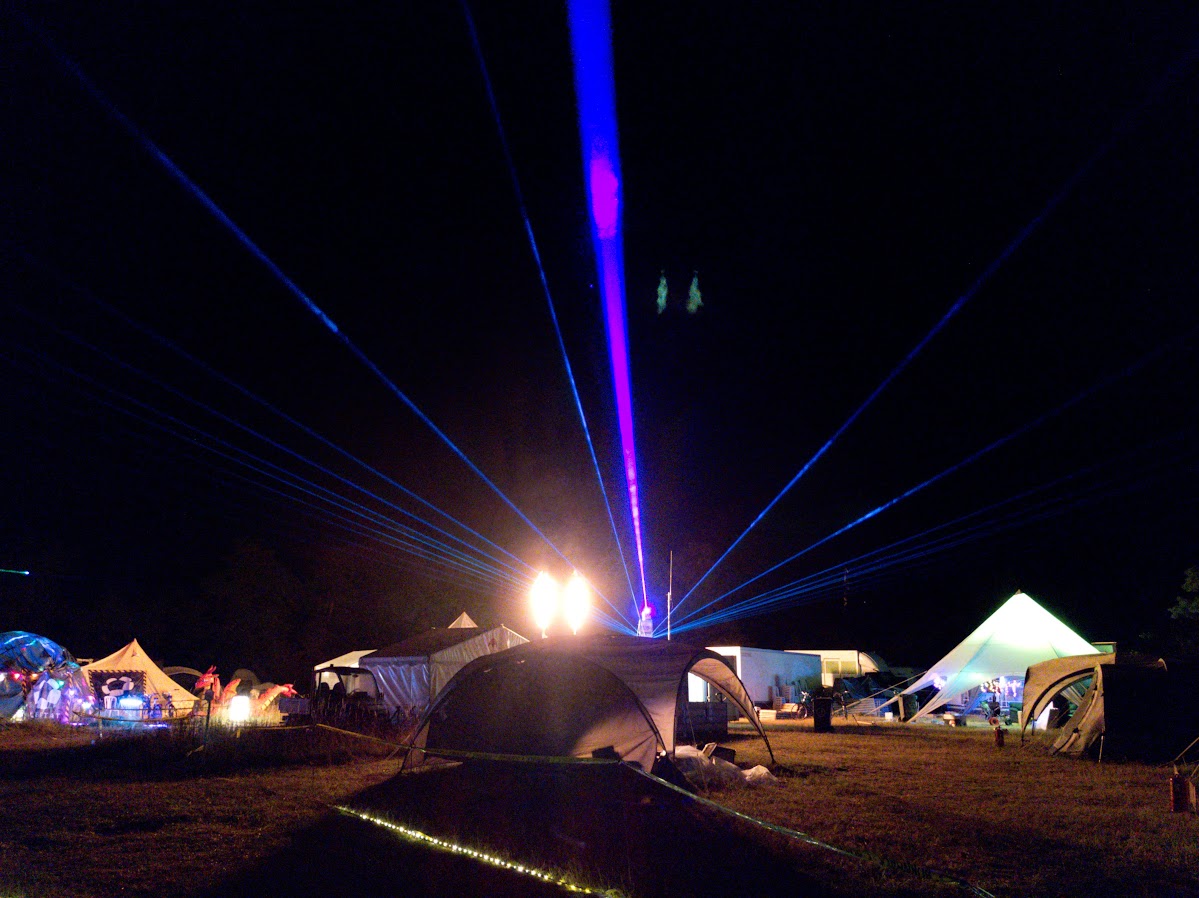 The best-kept secret about BornHack is that it is actually a two week event. One week is the actual event, the other is buildup and teardown. It is a lot of fun and it can be very rewarding to be a part of. The first buildup crew arrived at the venue almost a week before the opening day. The last teardown crew left the venue 4 days after the closing day. Teardown was delayed about 24 hours due to massive heat making the work slow and difficult. But all things considered buildup and teardown went really well. Thank you to everyone who helped out!

The bar during Bornhack and a few days before teardown ended. What a transformation :-D

We had a brand new video setup this year for streaming and recording talks. The video team did an amazing job of adapting to using the new hardware and software, and it worked really well! Remote viewers could stream talks as well as the very popular ant farm stream live, and of course everything was recorded. After the event we had to do manual post-processing and upload of videos to C3VOC. It took a while to get there (and we will have this automated for 2023) but it is with great pleasure we can finally announce that the BornHack 2022 videos are available kindly hosted by media.ccc.de. 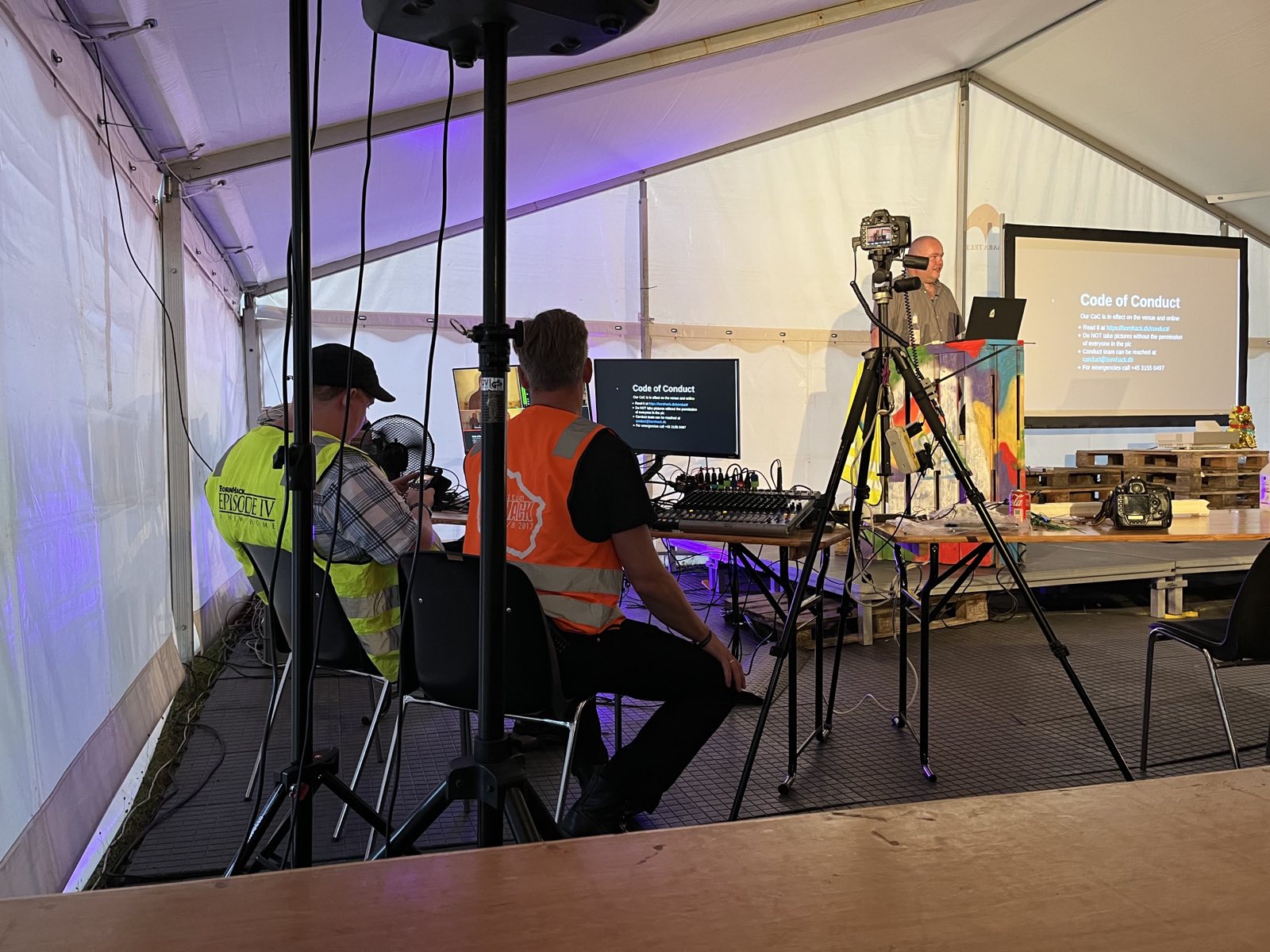 We love all the positive feedback we've received, but we also want to know how we can improve. Please use the feedback form to provide feedback about the event (positive and negative). Orga has an evaluation meeting about a month from now where we will be going through all the feedback. Remember you can also provide feedback on individual speakers and talks by pressing the Feedback button on the detail page for the event in the program. The Content Team uses this information to help shape the program for the next BornHack event so please make your voice heard if you want to influence who goes on stage next time.

We really want to see all the cool pictures and video you have from the event. We also want an easy way to access, search and archive such content. To that end we are working on a public BornHack media archive where people can upload pictures and video from the events under a CC license. If you want to help build it you can contact the website team.

We will be announcing the dates for BornHack 2023 soon, we expect it will be the 2nd to 9th of August 2023, but it is not quite final yet. We will create the 2023 volunteer teams and add tickets to the webshop and all that within a few months.

Thank you to everyone who was a part of BornHack 2022. It was fantastic!